The Swiss brand Omega has introduced a new generation of quartz watches designed specifically for astronauts; this time with features for future Mars explorers.

The Omega Speedmaster has long been associated with space exploration. In 1969, NASA certified this model for all manned space missions, and on the wrists of American astronauts, the watch was the first to hit the moon. However, the hand-wound Speedmaster Profesional Moonwatch is not the only watch made by Omega to have been in space. ESA (European Space Agency) has long been involved in the development of a state-of-the-art timepiece for its pilots and crew members, the so-called Skywalker or X-33, in collaboration with the Swiss brand. This is a watch designed to measure time on Earth and Mars, Omega Speedmaster X-33 Marstimer.

The original Speedmaster Moonwatch is by far the most famous of all space watches. However, it can be considered somewhat outdated in terms of technical characteristics when it comes to real use. The classic mechanical chronograph is a very attractive accessory, but its practicality and functionality are limited. This led to the development of a new generation of watches designed to be worn by astronauts.

The Speedmaster X-33 was developed under the direction of General Tom Stafford, a former astronaut and member of the Apollo X mission, as a tool for NASA pilots. Launched in 1998, this was a multifunctional analog/digital quartz watch designed in collaboration with astronauts and some former military pilots. Made entirely of titanium, it takes some of the classic Speedy design elements to a new, stronger and more modern level. Functions include a chronograph, calendar, multiple time zones, an alarm clock and a rotating calculation bezel. Production was stopped in 2006, but the watch remained in NASA mission service.

In 2014, Omega introduced the Speedmaster Skywalker X-33, developed in partnership with the European Space Agency (ESA). Made from grade 2 and 5 titanium with upgraded design and functionality, it is once again a certified tool for professional pilots. This 45mm watch has an LCD screen with features such as time zones, alarm clock, chronograph, countdown, calendar, and dedicated displays for astronauts; task completion time (MET) and stage completion time (PET).

Omega has now introduced the 4th generation of the Speedmaster X-33 watch. Visually, the new Speedmaster X-33 Marstimer is similar to its predecessors. It has a 45mm grade 2 titanium case with well integrated pushers. The main design update concerns the bezel, which plays on the theme of Mars, with an anodized aluminum bezel ring in hematite red, reminiscent of the dust of the red planet. This color is also present on the second hand, with a black to red hematite gradient. The bracelet is also identical, as is the case back. The dimensions haven’t changed either, with a height of 14.7mm and an acceptable diameter of 48mm from lug to lug.

The dial of the Speedmaster X-33 Marstimer is still a backlit LCD with a combination of analog (hours, minutes, seconds) and digital displays. But now some Mars-focused features have been added to the watch, in line with ESA requirements. According to the agency, the features had to be adapted because a day on Mars is 39 minutes and 35 seconds longer than on Earth. This complicates matters due to the need for coordination among the various mission members on the Martian surface, and to ensure that control contact is also accurate, given that they are on classical Earth time. Mars has its own time zone, but also its own pace.

The watch now contains an innovative solar compass to find true north on the planets Earth and Mars. And of course, they also have access to the apps available on the traditional Speedmaster Skywalker X33, such as MET (task time), PET (stage pass time), alarm clocks and a perpetual calendar. The watch is powered by a caliber 5622 movement with a battery life of 24 months, covered by a titanium caseback inscribed with “Speedmaster X-33 Marstimer ESA tested and qualified”.

The Omega Speedmaster X-33 Marstimer is worn on a Grade 2 and Grade 5 titanium bracelet. A custom NATO strap and a strap changing tool are included in a custom roll bag featuring Hebe Canyon, a unique steep-sided depression on the surface of Mars. 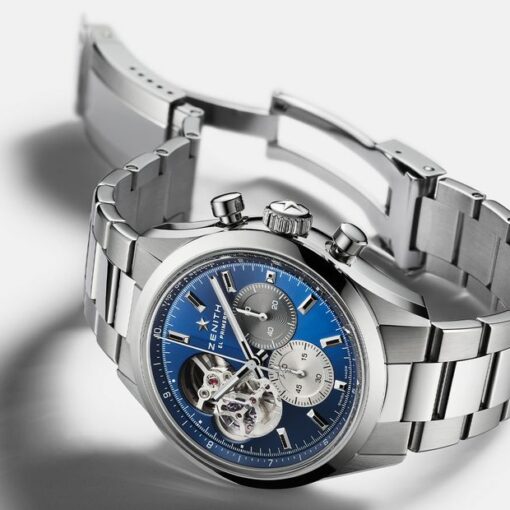 The Swiss brand Zenith presented an updated version of the El Primero model in an attractive blue color. 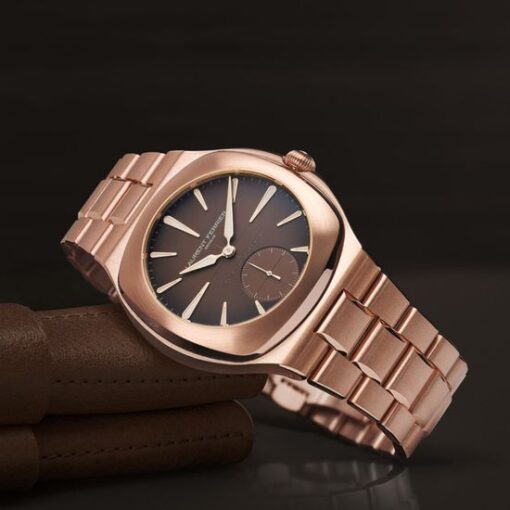 Bell & Ross has introduced a new flagship model of the fifth series, the BR-X5 watch.